You are here: Home / Ketogenic Diet / How to Deal With Hunger and Cravings While on Keto

Unfortunately, most diets aren’t sustainable, and that’s why anyone who has lost weight has usually gained the weight back. Often, this is the case because most diets can lead to hunger and wanting more food. This is where the ketogenic diet, a high-fat, low-carb diet provides an excellent advantage that can make losing weight a lot easier than other diets: it suppresses your appetite and helps you eat less. If you’re curious about what else the keto diet entails, The Body Reboot book tells you how to get started, what type of food you should be eating, and more. If you’re wondering what techniques you should try to deal with hunger, keep reading. It’ normal to initially feel hungry when starting the diet, but after a while, hunger should lessen. However, when hunger strikes below are some tips on how to get past the hunger machine and instead, make positive decisions.

WebMD recommends eating more slowly, that way you have time to taste your food and think before you continue eating. Not only that but as WebMD mentions below, your brain needs time to catch up with your stomach.

Slow down, you're eating too fast. It takes at least 20 minutes for your brain to get the message that your stomach is officially “comfortable” and that you should stop eating. If you eat slowly, the brain has a chance to catch up with the stomach, and you're less likely to overeat.

While it may be easy to make a quick protein shake, Healthline recommends eating something solid instead. A couple of keto snack ideas are a few almonds, guacamole, or celery with keto-friendly peanut butter, for example.

One recent review found that compared to a solid snack, people who ate a liquid snack were 38% less likely to compensate by eating less at the next meal.

In a second study, participants who were fed a semi-solid snack reported less hunger, a lower desire to eat and a greater sensation of fullness than those fed a liquid snack.

Solids require more chewing, which can grant more time for the fullness signal to reach the brain.

Scientists also believe the extra chewing time allows solids to stay in contact with the taste buds for longer, which can also promote feelings of fullness.

Ketogains adds to this belief by also mentioning why he feels eating whole foods while on a keto diet are imperative:

Put an emphasis on WHOLE, nutrient-dense foods, especially PROTEIN. Shakes are ok, for example, as a way to reach macros… but if you find yourself constantly hungry, you are better off eating chicken breast / beef, etc vs liquid calories.

Hopefully, the keto diet has helped curb your hunger, but there’s still a chance you may revert to old habits and binge eat. If you do don’t be hard on yourself, but do figure out ways to distract yourself so that this won’t happen. Heart.org mentions why binge eating may take place and what you can do about it.

Does this sound like you — able to control your portions sometimes but losing control and uncontrollably eating large amounts of food at other times? This is called “binge eating” and lots of people do it.

A binge is when you eat a lot of food in a short time and it's usually not healthy food. Binge eating is bad for you, especially if you have diabetes.

When you initially go on the keto diet, you may be really hungry, especially if you had a diet that was rich in carbohydrates that included a lot of sugar and chips, for example. However, NutrientHero says that feeling ravenous won’t last forever. As time goes on your hunger should lessen.

Alex, I feel hungry all the time. I mean ALL THE TIME!!! Do you want me to tell the magic formula? When you first start keto, you’ll be hungry. Your brain is deprived of glucose and is trying to switch to running on ketones. Your first 6 weeks on keto are the most crucial when it comes to a diet. Most keto coaches suggest to do 2 difficult things at once:

This doesn’t work for most people because it is like you are trying to learn how to walk and to run at the same time. Disclaimer, keto for me is not a fast weight loss diet. If you want to lose weight fast, the best diet is not eating period…But if you are serious about balancing your hormones, reducing inflammation and losing weight in the long run, here is the true secret formula: During the first 6 weeks, your main goal is to stay keto (under 20g net carbs) and eat as much as you want.

Sounds crazy? Well, just wait till week 3. Most of my clients stabilize their insulin level and simply start naturally eating less. They easily skip breakfast and do intermittent fasting because they feel full. After 6 weeks you become keto-adapted and your body will naturally do calorie restriction without you even thinking about it.

KetoVale adds to NutrientHero’s thoughts that the first couple of days of turning your body into a fat burning body may be challenging, but don’t give up. It may take some time to get adapted to the new diet, but until then use willpower and learn how to deal with cravings by replacing cravings for something keto-friendly, such as a tasty pepperoni or avocado.

Once you switch to a keto diet, your body will need to adapt to it, and based on your previous diet, this might be a bit of a challenge at first. Going from 200g-300g to 25g net carbs per day is an enormous change.

Thankfully, our bodies do an amazing job at adapting, and the keto diet is no exception.

If you were eating a lot of processed carbs before, limiting them is likely to provoke some particularly strong cravings, and sugar cravings are usually the worst.

There’s hope, though. These typically only last a couple of days or a week. After that, you’ll start noticing that you’re craving a whole new set of delicious foods such as roasted meat and salad, for example!

Later on, when you are keto-adapted and you try out intermittent fasting, you may experience days of hunger. If this happens ShockingFit.com recommends trying the following tips to help curb hunger (supported by a study he mentions is from Medical Press):

Researchers at Columbia and Rockefeller Universities have identified cells in the stomach that regulate the release of a hormone associated with appetite.

“Circadian clocks allow animals to anticipate daily events rather than just react to them,” said LeSauter, who ran and supervised the study’s experiments. “The cells that produce ghrelin have circadian clocks that presumably synchronize the anticipation of food with metabolic cycles.

What this means is that eating a set number of meals at particular times of the day is a trained behavior. 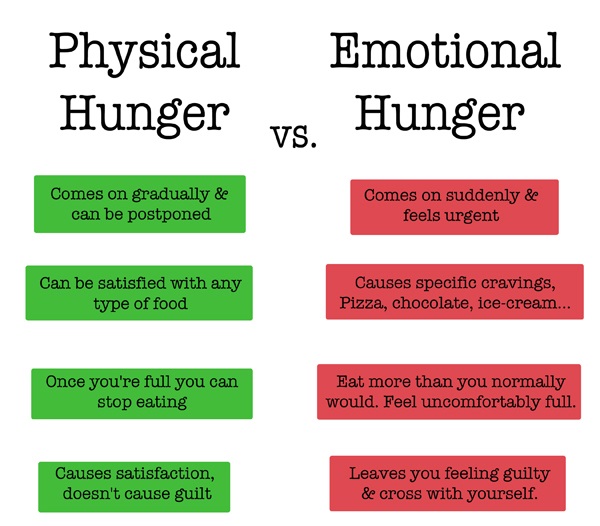 And often when we think we’re hungry it's not that we're experiencing true physiological (body) hunger, but rather psychological (head) hunger.

Once we realize this then it's clear that all it takes is a little bit of unwiring until our body adjusts to an Intermittent Fasting Diet.

Perfect Keto argues that after being keto-adapted, you shouldn’t be facing a lot of hunger because you’re eating nutrient-rich foods. Sometimes it’s easy to get caught up in thinking you haven’t eaten enough, but perhaps that’s what you were used to before. Now you shouldn’t feel like you have to overeat. A keto diet should hopefully keep you feeling full thanks to a new and improved diet.

With the ketogenic diet, we’re able to eat a lot of high-quality, nutrient dense foods. So instead of stressing about total caloric intake for the day, our bodies are able to naturally eat less calories because we’re feeding them foods that are satisfying.

The best way to use the ketogenic diet for hunger suppression is by following it! That means eating for ketosis, which means a lot of healthy fats, nutrient-dense low-carb vegetables, high-quality, fatty proteins, and avoiding carbs.

Think about how that compares to a diet full of carbohydrate-rich choices and other foods that are lower calorie, yet not as nutrient-dense. The body burns through carbohydrates first, so even if the calorie count is low, it’s not long before we’re feeling the need to eat again.

It’s far better to focus on foods that provide a high level of satisfaction while feeding yourself food nutrition at the same time. We’re then able to savor the foods we eat and feel more satisfied with less — while avoiding the hunger pangs and discomfort that comes from following a diet that leaves you hungry.

At the time of writing this post, we're currently giving away free copies of the Body Reboot book because it's our mission to increase awareness and to help people lose weight and get healthy! If you help us cover the cost of shipping, we’ll send a copy to your door FREE. Go over to this page to see if there are any copies left.